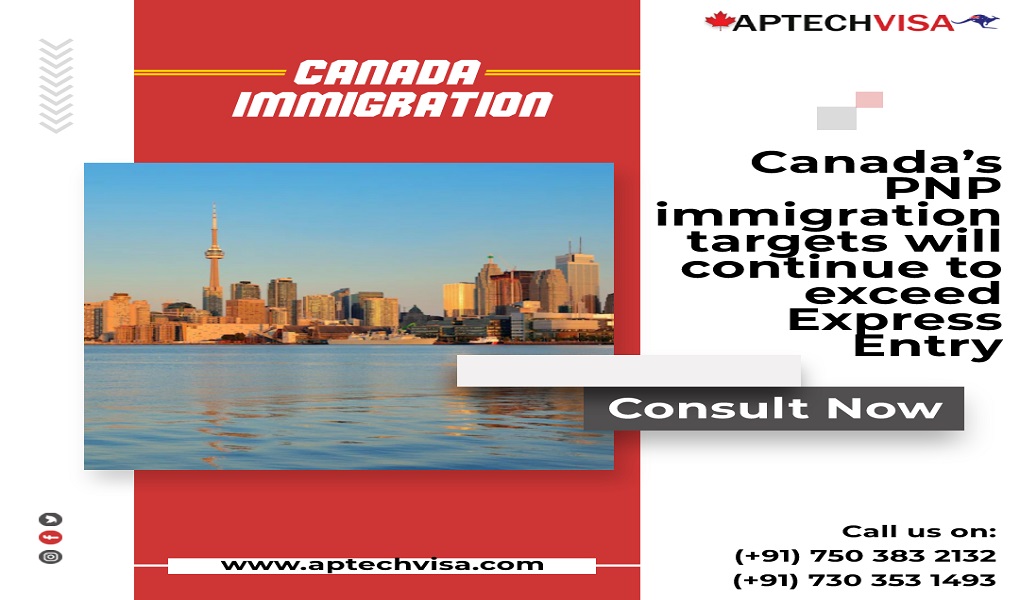 The PNP immigration for Canada to surpass Express Entry

Over the next three years, Canada intends to increase immigration through Provincial Nominee Programs (PNPs). On November 1, the Immigration Levels Plan 2023–2025 was unveiled, claiming that PNPs would receive more visas than the Federal High Skilled category. Express Entry is used to manage all federal high-skilled programs. They consist of the Canadian Experience Class, the Federal Skilled Trades Program, and the Federal Skilled Worker Program.

Some PNPs are also managed using the online Express Entry system. There is at least one PNP in each of the nine participating provinces and territories that extends invitations to potential nominees from the Express Entry pool.

All applicants for Express Entry first become Federal High Skilled candidates since they must first be qualified for one of the programs. When someone applies for Canada permanent residency, they are regarded as PNP applicants if they receive a provincial nomination while they are still in the Express Entry pool.

Out of all economic programs, the Federal High Skilled category has historically had the greatest targets. Historically, the PNP category has placed second.

In the 2022–2024 levels plan, this was reversed, with PNP targets outnumbering Express Entry for the current and next years. Canada anticipates the tendency to continue into 2025 under the new plan.

Immigration, Refugees and Citizenship Canada (IRCC) stated in the government's press release that the purpose of the increase was to emphasize regional immigration in the 2023–2025 Immigration Levels Plan.

The PNP outperforms the Federal High Skilled category throughout the following three years.

The PNP targets were not broken down by whether applicants used Express Entry or a base PNP stream. Moving2Canada requested a disaggregation, however, the IRCC media section did not respond in time for publication.

There is still a possibility that Express Entry, when referred to collectively as the system that manages the Federal High Skilled and some PNPs, could still be a larger immigration pathway than the PNP on its own.

According to the 2022 Annual Report to Parliament on Immigration, 54,020 PNP applicants and 139,459 Federal High Skilled applicants were each granted permanent residency status in 2021.

The point is that Canada prioritizes regional immigration.

When IRCC begins inviting Express Entry candidates based on criteria other than the Comprehensive Ranking System in early 2023 that may change. In addition to other economic variables like occupation and French language proficiency outside of Quebec, the IRCC will have the option to invite candidates based on regional standards.

However, the PNP was expressly developed to address provincial needs. In 1998, Manitoba became the first province to formally join the PNP. Since then, a significant portion of its immigrants has arrived via its PNPs.

Immigration to less well-known parts of Canada is made possible via programs with region-specific qualifications. Otherwise, immigrants choose their destinations based on availability heuristics or the cities they have heard of, like Toronto, Vancouver, Montreal, etc.

In addition to the PNP, regional requirements exist for the Atlantic Immigration Program and the Rural and Northern Immigration Pilot (RNIP). For the following three years, the Atlantic Immigration Program is anticipated to welcome between 8,500 and 14,500 newcomers annually. Up until 2024, the RNIP will only accept a maximum of 2,750 applications per year because it is currently an experimental program. Then, it can develop into a program or not be renewed at all.

Canadian provinces have been requesting more immigrants from the federal government, as well as more immigration authorities in Saskatchewan's case.

The Canada-Quebec Accord has given Quebec the most control over immigration. If a federal immigration program is established, like the TR2PR pathway, Quebec is not automatically included; the province must choose to participate. The province determines its own immigration numbers. This explains why Quebec is excluded from PNPs and Express Entry.

Jeremy Harrison, the immigration minister for Saskatchewan, advocated for the province to have more control over immigration last summer.

"Saskatchewan expects to have the same immigration treatment as Quebec. Harrison stated in a July media release that "immigration is a critical part of our government's ambition to develop the province to 1.4 million people and create an additional 100,000 jobs by 2030. The most effective way for provincial governments to meet local labour-market demands with new Canadians is to do so. The provinces shouldn't be constrained by the federal government's imposed economic categories or restrictions on provincial nominee programs.

Monte McNaughton, the minister of immigration for Ontario, has long urged the federal government to treble the number of immigrants the province receives through the PNP. Following the publication of the 2023–2025 Immigration Levels Plan, the minister reaffirmed this opinion in a tweet.

The new allocations will be given to the provinces in March 2023, according to Canada's Minister of Immigration, Sean Fraser.